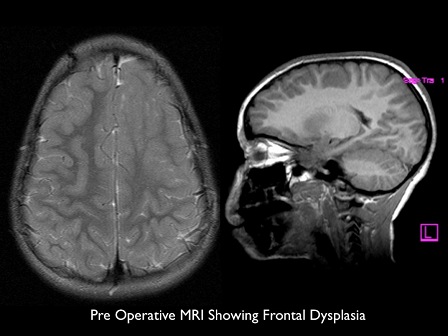 A 7 year old male child of Afro-caribbean origin with drug resistant epilepsy was admitted for intracranial EEG monitoring following a non invasive pre-surgical assessment. He had been born at 38 weeks by an elective Caesarian Section and the neonatal period was uneventful and development normal for the first 12 months. The first seizure occurred at 18 months and was febrile. It was characterised by deviation of the eyes to the left, left sided facial weakness, tonic posturing of both upper limbs, followed by clonic jerking which lasted for between 2 and 3 minutes. Between the age of 18 months and 2.5 years he had 10-15 stereotypical seizures, all of which were febrile, one of which lasted 30 minutes and required rescue medication.

From the age of 2.5 years onwards the child experienced afebrile seizures that involved behavioural arrest, head shaking, a look of fear and tonic extension of all limbs followed by a clonic phase. The seizures lasted for between 5 to 30 minutes and were followed by a right sided weakness and slurring of speech.  The maximum seizure free period was 2 months and a total of 7 anticonvulsant medications had been tried alone and in combination.

There was no family history of note. Development had been normal until a few months prior to admission when some regression of speech had been noted. On admission it was noted that he walked with a circumductive hemiplegic gait and had a moderate grade 4/5 right hemiplegia.

Inter-ictal and Ictal EEG both suggested lateralisation to the left hemisphere but was not clearly localised. MRI showed an area of blurring of the grey/white junction involving the superior and middle frontal gyri and extending down to the ventricle and suggestive of a focal cortical dysplasia.

The case was discussed in the Multi Disciplinary Epilepsy Team Meeting and because of the lack of clear definition of the margins of the abnormality and its location directly adjacent to the pre-central gyrus, it was decided that intracranial EEG recording and cortical stimulation were required. The family were seen in the Epilepsy Surgery Clinic and the proposed procedure and it’s risks and benefits discussed. The family were also given written information to inform their decision and contacted by our Epilepsy Nurse for further counselling.

At the time of admission informed consent was taken. Preoperative haematological investigations revealed that the child had Sickle Cell trait and a factor VII deficiency, which was managed appropriately peri-operatively. At operation two sub-dural grids with 6×6 and 4×5 contacts respectively were placed over the left central and frontal regions and an 8 contact strip placed over the left temporal neocortex. A reference strip was placed posteriorly. In view of the clotting abnormality it was decided not to place an intra-parenchymal electrode.

Following the initial craniotomy he made a good recovery and a post-operative CT was satisfactory with expected post-operative changes. Approximately 36 hours following surgery he had a number of seizures which were focal and in nature and followed by a worsening of his hemiparesis but conscious level was maintained. A CT was performed which showed a collection superficial to the grid but in view of the preserved level of consciousness it was decided to continue monitoring.

24 hours later the hemiparesis remained worse than preoperatively and he developed some drowsiness and so the CT was repeated and this showed further enlargement of the collection and some effacement of the left lateral ventricle and displacement of the midline. It was decided to evacuate the presumed haematoma and abandon the recording.

At operation the collection was found to be of CSF and confined to the extradural space alone and therefore the decision was made to evacuate this and leave the electrodes in situ. Following this second procedure the patients hemiparesis improved, as well as his level of consciousness and his intra-cranial recording and stimulation was continued for a further 5 days with successful localisation of seizure onset and function. At a final procedure the electrodes were removed and a resection performed. He made a good post operative recovery and at early post-operative review is seizure free with long term outcome awaited.

Intracranial recording is not embarked upon lightly or without a clear strategy and a full understanding of the potential  risks and benefits of the procedure, which have to be balanced against the severity and functional effects of the seizures upon the patient. This child had severe, life threatening epilepsy associated with a neurological deficit and some loss of developmental achievements. Despite the apparent lateralisation of the Ictal EEG, the MRI limits of the lesion were unclear and its proximity to eloquent cortex favoured functional mapping. Pre-operative investigations had revealed a clotting abnormality which was corrected pre-operatively and not felt to represent a contra-indication to surgery. A complication did in fact occur but was unexpectedly found to be due to a CSF collection. The explanation for this is not clear. An on lay Collagen matrix sheet has been used routinely over the last 5 years in our unit and this has dramatically reduced the risk of CSF leakage and the associated risk of infection, but did this in some way cause the CSF collection to be localised between the dura and the bone? Some centres use a subdural drain in association with the grid and perhaps this would have prevented this complication?

Another lesson to be taken from this complication is that despite needing an additional craniotomy we were able to continue with the implantation and successfully complete the planned recording and  stimulation satisfactorily. Clearly had the intra-opertive findings at the second craniotomy revealed either a haematoma, which could have recurred due to the clotting abnormality, or brain swelling, then the implantation would have been abandoned.

Any thoughts or comments?