In memory of 'Tony' Hockley

Tony was a role model and inspiration to many British neurosurgeons and his reputation spread internationally, culminating in him becoming ISPN President for 1997-1998.

He was a kind and caring human being, who at the time of his death had achieved so much and had much to look forward to. His death was a tragic loss to his family and to his extended ‘neurosurgical family’ but his inspiration lives on. 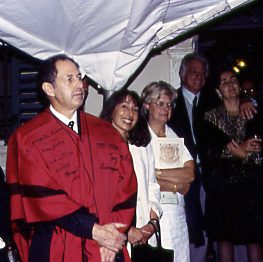 The “3Hs in Toronto” (Kenneth Till’s label) met Tony upon his arrival here in January 1975. Being the youngest of the “3” I was seconded as Tony’s host and didn’t that turn out to be an absolute blessing! His arrival would have been days or a few weeks as I recall, following Nicholas’ birth. The new daddy was justifiably homesick and a comment then of Monday, January 6th in my personal diary (of shoes and ships) states that Judith and I took Tony that night to our club “for a drink and dinner and cure of ‘culture shock’. (This is Canada, ehh?). A few other notations about him during his six months with us – “After tidying up, a little gossip with Tony at Maloney’s Bar. Heather to arrive Sunday.” The “3Hs” says Tony, are “Haematology,Humphreys, Hockley!” (whatever that means!). “Tony gets a good paper written on ITP and intracerebral haemorrhage.” “Tony does a nice job excising frontal medulloblastoma.” Tony’s appointment with us ended June 30th that year, but with typical enthusiasm he, Heather and Nicholas stayed on for afew weeks and explored Ontario. Clearly, a bond had formed between us. There remain many subsequent memories of our times together – the ISPN meeting that he hosted in Birmingham and then a subsequent one in Ottawa after which he and Heather drove back to Toronto with us for some down time, and six years ago,  both of them coming across for my retirement event and our personal side trip to Niagara-on-the-Lake for dinner and show at our Shaw Festival; most recently, Judith and I enjoyed a family luncheon at 80 Westfield Road in the Hockley home, a couple of days following the Liverpool ISPN meeting.

The news of the sudden and unexpected departure of Tony Hockley, shocked us as we were struck by lightning. It is fair to say that we, pediatric neurosurgeons, have all become orphans. Not only did we lose a brilliant and highly estimated colleague, but also a guide who always tried to combine science and humanism with talent, generosity, philosophy and humility.

For me he was a friend, a friend that, unfortunately, I did not see as frequently as I would have wished. Congresses, International courses, symposiums marked the tempo of our meetings. The last time we saw each other, just a few days before he left us, was at the PING meeting; our common baby. The PING, for those who don’t know, is the “Pediatric Informal Neurosurgical Group” that we decided to set up 20 years ago, with the purpose to link pediatric neurosurgeons from both sides of the Channel on a scientific and friendly bases. It was his idea that the PING has no President, no Secretary, no Board and no publication. And this is the exactly Tony: “informal” but studious and professional, requiring everyone to get rid of his ego, focusing mainly on our errors and insufficiencies in our field. Thanks to him, the PING has been a success, making a better link than Eurostar and Internet could do, developing exchanges and pushing young surgeons to now cross the Channel and train in our respective countries.

Besides his job, Tony had another passion, his family. His children were his pride and Heather, his wife, the inseparable companion whose smiles, kindness and charm brightened up our meetings. We would like them to know that we share their loss and their sadness.

Pediatric neurosurgery is in grief. British neurosurgery lost one of its prominent leaders. Tony, you left us too early; we will forever notice your absence and never forget your contribution and enthusiasm.