In Memory of Edgardo Schijman 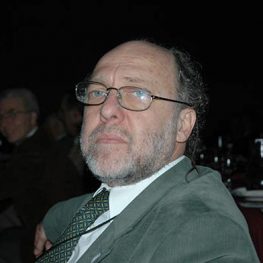 On April 17, 2007, Edgardo Schijman died in Buenos Aires, Argentina. He was a valued and loyal Member of the ISPN for more than two decades. Edgardo was a creative and a multitalented individual, besides Neurosurgery he had a passion for the arts; he was a painter, a poet and a writer.

He had special interest in Teaching and International Education and was a driving force behind the organization of three ISPN sponsored Pediatric Neurosurgery courses in Argentina (Iguazu, Tafi del Valle and Buenos Aires). He played a key role as the Secretary of the ISPN Annual Meeting held in Buenos Aires in 2004 (ISPN 04).

In 2004, Edgardo became a member of the ISPN Executive Board and Chairman of the Education Committee. He took this role with a great deal of enthusiasm and during his tenure he organized CME Courses in; Manila, Hong Kong, New Delhi, Havana, Goa and Shanghai. Additionally he created and developed Educational tools such as:

Edgardo contributed frequently to our journal Child’s Nervous System with scientific papers, comments and editorials. In 2003 he conducted the International Survey on Chiari Type 1 Malformation the results of which were subsequently published in ChNS.

Personally, I will remember Edgardo as a good old friend and a colleague who was always there to lend a helping hand. During my term in office both as the Society Secretary and President, he was one of the first to offer me his support and cooperation.

I met with Edgardo for the last time in Buenos Aires last December, we enjoyed a long conversation over a cup of coffee, and among other things we discussed plans for future ISPN educational activities.

Goodbye Edgardo, thank you for sharing your talent with us and for all your contributions to our Society!