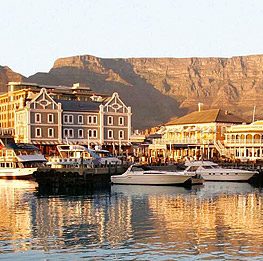 We are honoured to have had the opportunity to host the 36th Annual Meeting of the Society in Cape Town from 12-16 October 2008. This was the first ever annual meeting to be held in Sub-Saharan Africa and was attended by over 400 neurosurgeons from 54 countries. The meeting was

We are honoured to have had the opportunity to host the 36th Annual Meeting of the Society in Cape Town from 12-16 October 2008. This was the first ever annual meeting to be held in Sub-Saharan Africa and was attended by over 400 neurosurgeons from 54 countries.

The meeting was organized by a small committee comprising Jonathan Peter, Tony Figaji and Graham Fieggen. A professional congress organizer, Ms Sue McGuinness was appointed and her enthusiasm, imagination and professionalism had a major impact on the meeting, able supported by her superb team of Jan Candlish, Jill Swindale, Tyler Dawson and Claudette Scholtz.

The Victoria and Alfred Waterfront as a whole served as the venue, with the BoE Centre hosting the scientific meeting venue and the Table Bay Hotel serving as the conference headquarters. Two additional hotels in the Waterfront area, Breakwater Lodge and City Lodge, which were less costly were also selected as official venues and additional accommodation was arranged at All Africa House at the University of Cape Town. The dates of the meeting were carefully chosen to avoid clashes with major religious holidays and other international meetings and also the Cape winter! We were very fortunate indeed as the conference was preceded by the wettest consecutive three month period in a century, but the heavenly reservoirs were well and truly depleted by the time the meeting opened, bathed in sunshine for the entire week.

The Opening Ceremony was the highlight of the week for many delegates. We were truly honoured to have Nobel laureate His Grace, Desmond Mpilo Tutu, Archbishop Emeritus of Cape Town, officially open the meeting. His warm, witty and wise words really brought us together and the mood of celebration was captured by the musical group Red Zebra. The opening day was concluded by an inspiring address on lessons to be learnt in the African wilderness, entitled Ecological Literacy: Reading the spoor of the human animal given by Dr Ian McCallum, a poet, international rugby player, psychiatrist and wilderness guide.

An exceptional scientific program was developed under the leadership of the Scientific Chairperson, Mr William Harkness, who was also integrally involved in the organization of many other aspects of the meeting.

The social program commenced with the President’s Dinner at the Table Bay Hotel, a gracious evening enjoyed by 88 guests. The following evening, the Atlantic Room at the Table Bay was the venue for the Welcoming Reception. A spectacular spring evening with the V&A Waterfront and Table Mountain as the backdrop enabled old friends to meet up and new friendships to be forged.

An opportunity to view the posters in the Chavonnes battery at the BoE Centre on Monday evening was signalled by firing of the cannon by President-elect Tai Tong Wong. Delegates were able to and discuss posters with their authors while enjoying a cheese, biltong and wine-tasting event; featured estates included David Frost Wines and Constantia Glen.

Various sports options were available on Tuesday. De Zalze in the Winelands provided the venue for the traditional intercontinental golf tournament (with the traditional winners!) and for the more intrepid, a day of Beach volleyball at Clifton was followed by a moonlit walk up Lion’s Head with Tony (full moon by special arrangement).

An African Gala Evening at Moyo on the Spier estate was the highlight of the social program; over 400 guests enjoyed the scenic drive through the vineyards of Stellenbosch before enjoying a sumptuous feast and then partying to the sounds of AmaAmbush, a real Sefrican “jol”.

Accompanying partners and children were able to enjoy all these and other social activities, including a special tour to the Kirstenbosch National Botanical Gardens on Monday.

A particular effort was made to encourage participation by delegates from elsewhere in Africa. This was greatly assisted by substantial grants from the ISPN and the Nedbank Foundation as well as a number of generous donations to help individual neurosurgeons; in all, 14 African countries were represented at the meeting. The pre-meeting symposium was planned with this in mind, hence the First South African ISPN Course covered topics largely of relevance to African neurosurgeons.

This program of lectures on Saturday was followed the 4th Cape Town Neuroendoscopy hands-on Workshop on Sunday, held at the Karl Storz Training Centre. This workshop was fully sponsored by Karl Storz and was attended by over 50 delegates from 21 countries. Thanks go to the Chair of the Education Committee, Dr Tad Tomita, and to all those who arrived a day earlier in order to be able to teach; those who were able to escape the avalanche of meetings that characterize ISPN Sunday were able to enjoy a day in the African veld at Aquila Private Game Reserve.

A Paediatric Neurosurgical Nursing Congress was held on Wednesday 15th, attended by 70 Nurses from around South Africa. The Integra Foundation played a crucial role in funding the participation of guest speakers Linda Littlejohns RN PhD and Cathy Cartwright RN, while local company Baroque Medical helped plan this pioneering event and together with Creatori Health helped fund many of the delegates.

The ISPN meeting was followed by a special symposium Neuromonitoring2008, convened by Francesco Sala, Tony Figaji and Graham Fieggen, held at the BoE Centre on Friday 17th. This symposium succeeded in aiming to highlight the value of new techniques for monitoring the CNS, either in the Operating Room through the use of Intraoperative Neurophysiological Monitoring, or in the Intensive Care Unit, using techniques such as intracranial pressure monitoring and brain tissue oxygen monitoring.

ISPN invited speakers Dr Eric Bouffet (Toronto) and Dr Pat Kirby (Iowa) kindly agreed to participate in a Brain Tumour Workshop which was held at Red Cross Children’s Hospital on Saturday 18th. Convened by Dr Jeanette Parkes and Dr Alan Davidson, this drew Paediatric Neurosurgeons from the ISPN delegates as well as Paediatric Oncologists from across South Africa. There can be no greater tribute to the success of this venture than the fact that a follow-up meeting has already been planned and this is set to become an annual event!

Sue McGuinness Communications’ exceptional standards were reflected in the high levels of performance manifest in the technical support provided in areas such as transport and tours, audiovisual, design and electronic support, entertainment, catering and accommodation.

A number of companies exhibited at the meeting, and Integra, Medtronic and Codman contributed generously to the President’s Dinner, Welcoming Reception and Gala Dinner respectively. Various companies facilitated particular projects and a number of their local representatives really went out of their way to help us prepare for the meeting, which happily exceeded their highest expectations.

Above all, the meeting was a joyous occasion and there is no doubt that Archbishop Tutu’s message of international fellowship resonated though the entire meeting.