A case of shunt migration 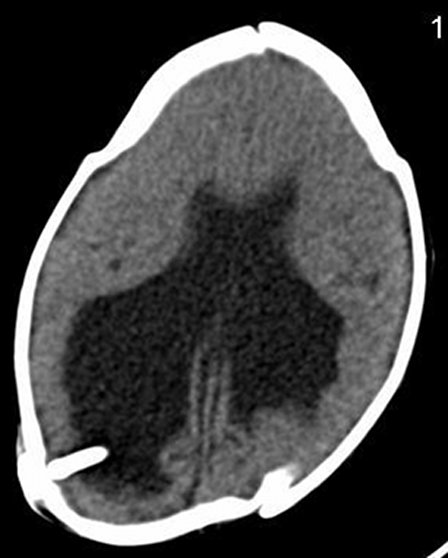 A case of shunt migration

A female Caucasian infant was born with a congenital hydrocephalus diagnosed antenatally by ultrasound screening at 20 weeks gestation. There was a history of a previous male newborn being diagnosed with hydrocephalus requiring a VP shunt. No maternal history or pregnancy concerns were reported.

The child was born at 38 weeks of gestation at which time the head circumference was over 98thcentile, with bulging anterior fontanelle and suture diastasis.

A CT scan and subsequent MRI confirmed hydrocephalus due to a congenital aqueductal stenosis. Considering the young age (less than 6 months), the option of an endoscopic third ventriculostomy was discussed but decided against because of the relative risk of failure.

The patient underwent the insertion of a right parietal VP shunt at 3 weeks of age. The VP shunt was inserted through a burr hole placed just anterior to the lambdoid suture and a small dural incision was performed. An antibiotic-impregnated system was used, assembled with a Rickham reservoir and low-pressure valve.

The procedure was uneventful.

At one month review however, the head circumference was increasing and a swelling on the shunt site at the head was noticed although the patient remained clinically well.

A CT scan (figure 2 a-b) revealed that the ventricular catheter had become displaced and was now found to be coiled in the subgaleal space.

The patient underwent a shunt revision and the intraoperative findings confirmed the CT appearances. The shunt system was entirely removed and replaced with a new system through the same burr-hole.

The post-operative CT (figure 3) was found to be satisfactory.

Over the course of my paediatric neurosurgical career I have either seen or heard about every conceivable complication relating to a shunt! Many of them are directly related to technique although not all of them could necessarily have been avoided whatever technique was used. In this particular case, where the catheter migrates outside the skull, a number of steps in the operation can minimise the risk. A small burr hole, coupled with a small dural incision and then securing the shunt to the pericranium or covering it with a pericranial flap could possibly have prevented this from happening.  Was the selection of valve appropriate? Finally, as ever with a shunt, meticulous closure of the scalp is required.

What about the choice of a shunt anyway? Would the child have been better off with an attempted ETV? The recent paper by Kulkarni et al is an extremely useful tool to make this sort of decision.

P.S. Of course I was not the surgeon……such things never happen to my patients (I wish!).

I too have seen this complication and agree with Dr Harkness’s implication that it is due to CSF flowing around instead of through the ventricular catheter.  The CSF gains access to the sub-galeal space creating a lake that the valve and catheter can float in with normal head movement causing the shunt system to move about pulling the catheter out of the head. I do two things to minimize the risks for this happening.  First, I do not open the dura with a cruciate incision.  Instead I use a brain needle or mosquito forceps to make a round hole by touching the dura with the instrument and then using unipolar cautery to burn a hole in the dura.  The hole created is slightly smaller than the diameter fo the catheter so that it fits snuggly around the catheter lowering the risk of leakage of CSF.  Second, I sew the proximal connector of the shunt valve to the pericranium to minimize the risk of the valve moving about after implant.