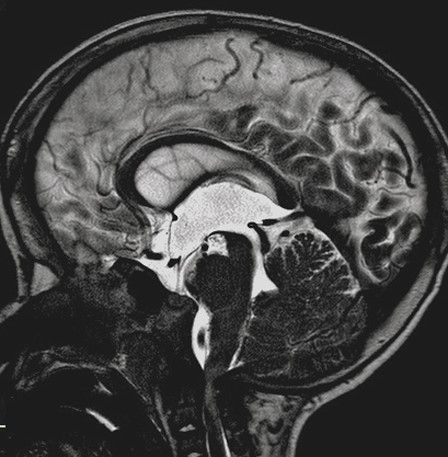 This case illustrates the hazards of operative positioning in children with compression at the craniocervical junction and the potential value of intraoperative neurophysiological monitoring.

A 4-year old boy with achondroplasia presented to his pediatrician with slowly worsening stiffness of his legs. His symptoms were mild and his gait was minimally affected; his bladder and bowel were functioning normally. On examination, there were no signs of bulbar dysfunction. Power in all limbs was 5/5. Tone and reflexes in his arms were normal, but were increased in his legs. MRI showed no progression of his ventriculomegaly compared with a previous head CT, but there was marked compression of his craniocervical junction due to predominantly dorsal narrowing at the foramen magnum. The lower brainstem/upper cervical spinal cord was severely compressed (Figure 1) and demonstrated high T2 signal at the site of narrowing. 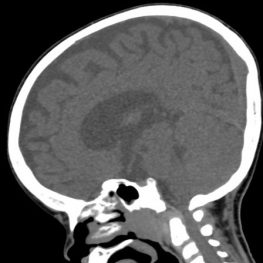 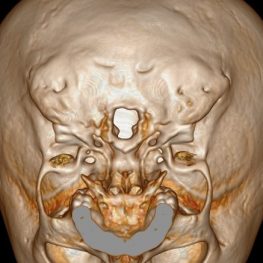 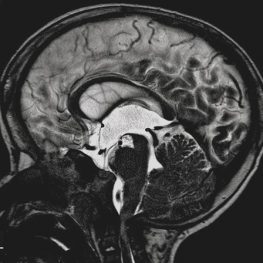 Given the development of his symptoms and the marked cord compression on MRI, foramen magnum decompression was recommended.

In the immediate preoperative period we examined the degree to which the child could flex and extend his neck. Although limited, a reasonable amount of flexion and extension was obtained; the child was almost able to place his chin on his chest, and appeared to have no symptoms while doing so.

Once this was tested, the child was placed under general anesthesia (TIVA) and baseline intraoperative electrophysiological recordings were obtained. For these recordings we examined bilateral arm and leg somatosensory (SEPs) and motor evoked potentials (MEPs) from trancranial electrical stimulation. At baseline in the supine position, we elicited reliable SEPs in arms and legs. Motor evoked potentials were small but repeatable in both arms; however, we could only elicit a reliable response in the left leg (Figure 2). We continued with intermittent stimulation at the lowest intensity that elicted reliable recordings. 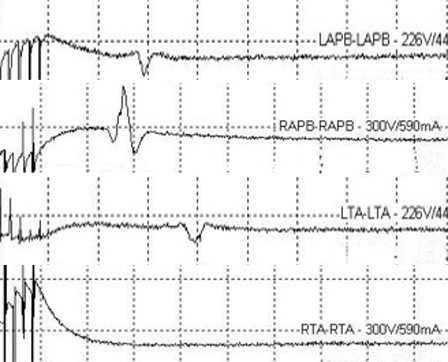 As a safety measure we repeated the potentials once the child was positioned prone. The head was fixed in a clamp and was held in slight flexion. All signals were then repeated and showed no change. We then proceeded to slightly increase neck flexion to enable better operative exposure of the foramen magnum. When the MEPs were then repeated after the positioning change, all signals were lost apart from a reduced signal in the left arm (Figure 3). No change had been made to the anesthesia and there were no technical reasons for the change in MEPs.

Immediately we returned the head to the deflexed position. When the MEPs were repeated we regained the arm signals but not the previously present signal in the left leg, even at higher stimulation intensity (Figure 4). The baseline intensities are shown here.

Given that we had previous stable signals in that position, we continued with the operation and decompressed the foramen magnum. During the procedure there were no further changes in signals related to surgery; however, over a short period the MEP signals diminished – this was thought to be related to a period of low blood pressure. When the blood pressure was returned to baseline, the signals were restored. At the end of surgery, signals in the arms had stabilised (Figure 5) and appeared to be more robust.

Figure 5: MEPs of arms and right leg showing robust MEP response in arms at the end of surgery.

Immediately post-surgery, the child had some demonstrable weakness in the left leg. This persisted for several weeks after the operation but steadily improved. By one month after the operation, full power of his legs had returned and his gait was normal. Postoperative imaging confirmed the decompressed craniocervical junction (Figure 6). 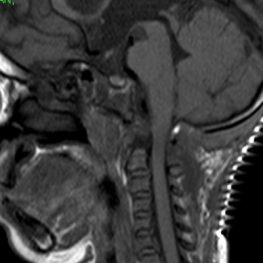 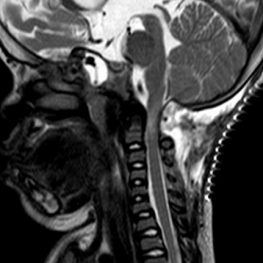 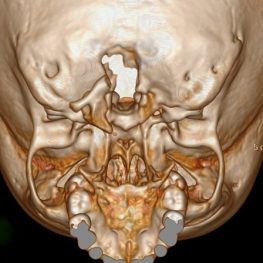 Craniocervical junction compression may occur secondary to many pathologies. Several factors must considered when managing these children; these are well-described in the literature. Different pathologies often require specific surgical approaches, but common to all of these is the worry that neurological injury may occur during positioning of the child. These patients often have existing brainstem/ cervical cord compression that may be exacerbated with small changes in flexion or extension. The problem is that when the child is under general anesthetia and placed in a prone position, the neck is unprotected, and so the surgeon cannot be sure that child will not wake up quadriparetic.

In this case, the surgical team tried to minimize the risk of a neurological deficit during positioning by carefully checking the extent of flexion and extension tolerated by the child. Despite this however, when the child’s neck was flexed while in the prone position, the MEPs were lost, leading directly to intervention that restored these (at least in the arms). Loss of MEPs correlates with a postoperative deficit. Maintenance of the D-wave from an epidural electrode, which was not used in this case, would have predicted that the postoperative deficit would be temporary, as it was in this child. This was likely given the careful flexion and the immediate intervention when the MEP change was noted.

In this setting, intraoperative monitoring (IOM) of sensory and motor evoked potentials may increase the margin of safety of positioning and surgery. Intact sensory and motor signals are predictive of preserved postoperative neurological function and enables a real-time functional perspective of cord health or injury. However, it is imperative that IOM appropriate for the case selected is performed, that the IOM is performed by someone with sufficient training, and that there is good communication between the surgeon and the IOM team. Inadequate IOM, or IOM performed by someone not equipped for the operative needs, may be ‘worse than no monitoring at all’.

This case was kindly supplied by the team at Red Cross Children’s Hospital, University of Cape Town, South Africa.