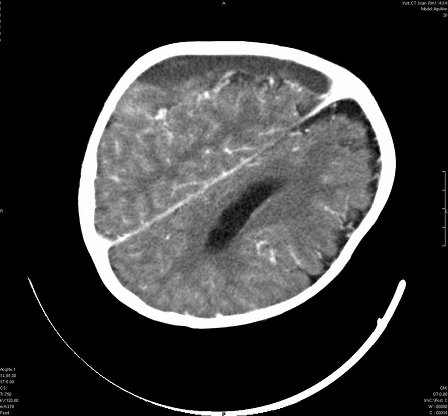 A 2-year old child was transferred as an emergency to the paediatric neurosurgical unit with a seven day history of malaise, pyrexia and increasing drowsiness. The child’s previous history included a head injury secondary to a fall two months previously, which had not been investigated at the time. GCS on arrival was E3 M5 V3, and her temperature was 38.5C. CT with contrast as shown in Figure 1a revealed a large peripherally enhancing subdural collection. The child was immediately taken to the operating room for frontal craniotomy and evacuation of subdural collection with a presumptive diagnosis of subdural empyema. At operation dark red haemolysed fluid was found which was under pressure and a specimen was sent for microbiology, the diagnosis appearing to be a subdural haematoma. However, on microscopy the fluid showed many polymorphs and gram positive cocci and she was commenced on appropriate intravenous antibiotics. Subsequent culture revealed Streptococcus pneumoniae. Post-operative imaging (Figure 1b) revealed a significant reduction in size of the empyema, and clinically the child was GCS 15 on day 1 post-operatively.

Figure 1b is an axial CT slice 2 days post-craniotomy and evacuation of pneumococcal empyema.

On day 6, her inflammatory markers began to rise (CRP>100) and she again developed a pyrexia of >38C. CT imaging (Figure 2a) revealed recollection of empyema posteriorly to the original craniotomy and the child went back to the operating room for a parietal burrhole evacuation of recurrent collection. Post-operative state included left focal seizures which required phenytoin administration; however the post-operative imaging showed a satisfactory evacuation (Figure 2b).

On day 16 a similar clinical picture of recurrent sepsis comprising pyrexia, malaise and raised inflammatory markers re-emerged, and further imaging (Figure 3a) revealed recollection of subdural fluid once again. This was re-evacuated through the previous burrhole and post-operative imaging (Figure 3b) and clinical status stabilized.

Figure 3b: Post re-evacuation through the parietal burr hole.

This case highlights a number of points. Firstly the ‘complication’ here is that a chronic subdural collection following trauma became the focus of a Streptococcus pneumoniae infection. We have seen a similar case in which a Streptococcal infection was found involving the intraperitoneal end of a VP shunt many years after the last surgical intervention.

Secondly the virulent nature of pneumococcal subdural empyema is emphasized and how this microbial infection in particular may result in the complication of recurrent collections requiring further surgery. Although the initial craniotomy and evacuation of pus in the subdural space can result in significant clinical and radiological improvements, there is a high incidence of persistent of loculated collections and a high clinical suspicion for continuing active infection needs to be maintained especially in the presence of continued elevation of inflammatory markers. We are presently investigating the utility of PCR analysis to determine bacterial genetic loads in infected or previously infected subdural aspirates.